Lump's Lead Hand Welder, Dale McKeon recently took a trip to the United States, no not those of Tara but the actual United States of America. Lump has been sending work to America for the last 4 years or so with Designs Abroad. Although Dale loved travelling around looking at Lump Stuff, we asked him what were some other highlights of his trip. "The most amazing piece of art/sculpture I saw would have to be the Statue Of Liberty. I know it sounds a bit clichéd to say that but it really was breathtaking. And being able to go inside the pedestal and actually look inside the statue was amazing. Having built a number of large pieces myself, I could truly appreciate the statue at an engineering level as well as at an aesthetic level." Said Dale. I cant say we were surprised by this because Dale is meticulous in his craft both from an engineering and aesthetic perspective. During his apprenticeship he won Apprentice Of The Year three years running as well as taking home International, National and State prizes for Metal Founding. Although Lump's sculptures are far from the scale of the Statue of Liberty, we know they are in the best of hands if being worked on by Dale. 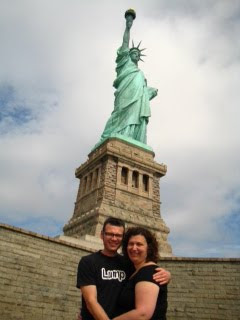