A couple of weeks ago Chris and I attended a very exciting and popular once in a life time viewing and auction. Although, while we were viewing the items to be auctioned, we were particularly surprised to stumble upon an unnamed sculpture by artist unknown. At first glance, we thought Greg Johns, recent winner of the $100 K McClelland Sculpture prize and well known leading Australian artist. But on closer inspection we decided that maybe it wasn't actually a sculpture by THE Greg Johns...it couldn't be. Because all of these sculptures were supposedly found, returned and destroyed.

Back in 2008 Greg Johns took a Melbourne based antiques, furniture and garden ornaments store to court for reproducing and selling copies of one of his original sculptures. In particular a sculpture named Whirling Mandala.

An article by Patrick McDonald reads that Johns was alerted to the copyright infringements by art dealer and owner of Australian Art Resources Matt Stafford. Stafford stumbled upon the copies of Johns work that were on display in the Melbourne store and head office of Sculptura, Temple Door. Temple Door agreed it had infringed on Greg Johns copyright and moral rights by producing and selling copies of his work that were made in Bali. Settlement included the store refraining from making, selling or publishing further copies of works that bear resemblance to the original sculptures. The settlement also imposed that the infringing works be returned to Australian Art Resources where they would be destroyed and concluded with a published public apology.

Unfortunately, it looks as though there are probably still a few rogues out there waiting to be stumbled upon and recognised, just as Chris and I stumbled upon the unnamed sculpture by artist unknown a couple of weeks ago. 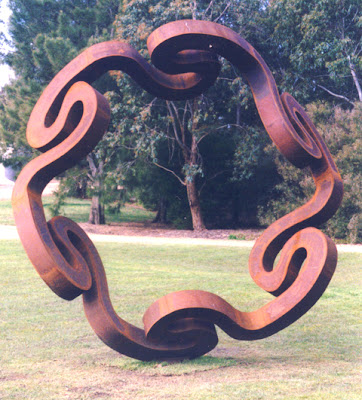